The Gift of Blossoms 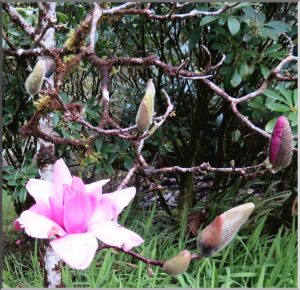 God Loves and chooses women for service.
God enables the willing with the Gifts they need.

I love the picture of the woman who is teaching children in the movie “The Nativity.” She tells the story with such life, passion, and involvement of the children in answering the questions. It just feels so connected and real when you study that way. We can’t really do that well online, but, we still can ask questions and be interactive. We also have a Facebook group that will allow you to enjoy interaction with others over topics.

I wish to share a few of my favorite stories about the women God chose to use in the Bible. Eve is chosen to be a help meet for Adam Genesis 2;18 “And the LORD God said, It is not good that the man should be alone; I will make him an help meet for him.” She is privileged beyond our wildest dreams in that she was the only woman created and able to live in a perfect world, no fear, no sin, light for clothing, full walking and talking relationship with God. What an amazing time that must have been.

Then there is the story of Miriam in Exodus where she first cares for the hiding of her younger brother, then is called at over 80 to lead in singing and praising God Exodus 15:20,21 “And Miriam the prophetess, the sister of Aaron, took a timbrel in her hand; and all the women went out after her with timbrels and with dances. And Miriam answered them, Sing ye to the LORD, for he hath triumphed gloriously; the horse and his rider hath he thrown into the sea.”

We have the great story of Rahab who God chose to be part of his people.
Joshua 6:22-25 is part of the story of Rahab who hid the Israelite spies from her people and let them over the wall of her house in Jericho. She saved her whole family by hiding two men and helping them escape. She was used by God even though she was a prostitute, a resident of Jericho, and a woman. God gave her insight into the future for herself and her family.

We have the story of Deborah the Prophetess and Judge, Judges 4:4 “Deborah, a prophetess, the wife of Lapidoth, she judged Israel at that time.” She is a prophetess and meets people under a tree on a daily basis She lives in a time that the Israelite are struggling and have been sold out to a wicked king and his general. She sees and prophesies that they will be delivered. We have no idea how many women were called to be judges in that time but this one we have several stories from.

Women of the New Testament

Mary the Mother of Jesus is told not to be afraid and that she is valued as a woman though she is very young. Luke 1:28 “And the angel came in unto her, and said, Hail, thou that art highly favoured, the Lord is with thee: blessed art thou among women.”

Mary goes to see her cousin Elizabeth who is carring her own miracle baby, John the Babtist. Elizabeth says when filled with the Holy Ghost “And she spake out with a loud voice, and said, Blessed art thou among women, and blessed is the fruit of thy womb. And whence is this to me, that the mother of my Lord should come to me? Luke 1:42 – 43.

In Luke Mary meets another woman, called Anna, who spent most of her life serving at the temple. This story is in Luke 2:36 – 38. “And there was one Anna, a prophetess, the daughter of Phanuel, of the tribe of Aser: she was of a great age, and had lived with an husband seven years from her virginity; And she was a widow of about fourscore and four years, which departed not from the temple, but served God with fastings and prayers night and day. And she coming in that instant gave thanks likewise unto the Lord, and spake of him to all them that looked for redemption in Jerusalem.”

Jesus spent a lot of time healing women and girls as well as others. We have the story of the woman who touched his garment in Mark 5:26–34 “And a certain woman, which had an issue of blood twelve years, And had suffered many things of many physicians, and had spent all that she had, and was nothing bettered, but rather grew worse, When she had heard of Jesus, came in the press behind, and touched his garment. For she said, If I may touch but his clothes, I shall be whole. And straightway the fountain of her blood was dried up; and she felt in her body that she was healed of that plague. And Jesus, immediately knowing in himself that virtue had gone out of him, turned him about in the press, and said, Who touched my clothes? And his disciples said unto him, Thou seest the multitude thronging thee, and sayest thou, Who touched me? And he looked round about to see her that had done this thing.

But the woman fearing and trembling, knowing what was done in her, came and fell down before him, and told him all the truth. And he said unto her, Daughter, thy faith hath made thee whole; go in peace, and be whole of thy plague.” This is a great story of faith, courage, compassion, and grace. It is repeated in Luke 8:42–48. This story is sandwiched into the story of Jairus. He is a ruler whose daughter was sick. She died while Jesus was on the way. Jesus raised her from the dead.

I love that Jesus calls Martha, Lazarus’ sister, to choose some time at His feet rather than fretting. Maybe that is because I am very much a Martha and get interested in all kinds of things getting done forgetting at times that God calls us to rest in His love and strive for balance.